Dr. Jason Gross, assistant professor of mechanical and aerospace engineering in the Statler College of Engineering and Mineral Resources, will receive a two-year, $200,000 grant — with optional funding for a third year —as part of the New Investigator Program. This is the second award this semester for Gross, a Morgantown native, who earned his bachelor ’s and doctoral degrees from WVU in 2007 and 2011, respectively, and previously worked at NASA’s Jet Propulsion Laboratory in Pasadena, Calif. Thanks to an Air Force Office of Scientific Research Summer Faculty Fellowship Program award, he will spend eight weeks during the summer at the Air Force Institute of Technology at Wright- Patterson Air Force Base in Dayton, Ohio, working on GNSS integrity monitoring. Seed funding for Gross’ work in this area was provided by the Statler College and WV EPSCoR RID and was entitled “Ultra-Wideband Ranging and Communications to Augment GPS Relative Navigation of UAVs” 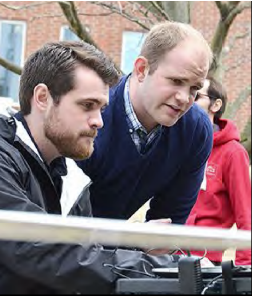